Haylage has a higher-moisture content and is fermented naturally inhibiting fungal growth within an air-tight wrapper applied close after cutting. It is allowed to ferment for at least six weeks before it can be used to feed livestock. Haylage produces very little dust which minimises the possibility of allergic reactions in horses which could lead to a number of symptoms including respiratory problems. Haylage releases higher amounts of energy being easily digested, vitamins and micro nutrients from the grasses used do not break down as much, maintaining their concentration level due to the mild fermentation inside the wrapping. 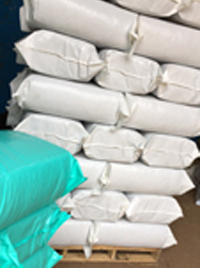